Publishers Weekly Picks Up Art on the Block

The industry insider guide Publishers Weekly today picked up "Art on the Block" and gave it what I consider to be a word perfect review:

Art on the Block: Tracking the New York Art World from Soho to the Bowery, Bushwick and Beyond
Ann Fensterstock. Palgrave MacMillan, $28 (288p) ISBN 978-1-137-27849-4
New York is indisputably a city of neighborhoods and art historian and collector Fensterstock’s mission in this lively and expansive cultural history is to reveal the impact of shifting real-estate markets, economic cycles, political movements, art-world producers, and consumers on contemporary art’s evolution. Rejecting any one explanation for the art world’s geographical, commercial, and aesthetic restlessness, Fensterstock instead presents “variables” to consider as she adeptly guides readers through the decades, from the decline of late-1960s Midtown modernism to 2010’s Lower East Side revival. Structured chronologically and by neighborhood, the book weaves a lucid narrative of how rising real-estate costs in the early 1970s made edgy Soho galleries cautious and increasingly commercial, prompting young artists attuned to punk and new wave to embrace the East Village scene, which remained influential until the late 1980s, when Chelsea and Williamsburg replaced it as epicenters of the art world in the 1990s and 2000s. Fensterstock concludes by arguing that the one constant here is change. Based on more than 150 interviews with artists and gallery directors, as well as news and criticism in popular art publications, the book is a highly readable introduction to the New York art world. 24 pages of color inserts. Agent: William Clark, W.M. Clark Associates.

I'm thrilled that the folks over there completely captured what I set out to do in the book.
My thanks to my agent William Clark for seeing the potential in this story from the outset and all of the professionals over at Palgrave Macmillan who helped me to craft it into a readable text.

Here's hoping that this augers well for wider press coverage and a whole host of readers who will know more at the end than they did at the outset. Call it old fashioned – but still my notion of why one reads!

Another Opportunity to Catch Up on the 'Other' 1980s

For those of you who weren't there – or for those of us who were, but recollections are now a little fuzzy – there is another New York museum show of note currently up in the city which looks at how it supposedly was 'back in the day'.

In March on this blog I recommended the New Museum of Contemporary Art's very thorough summation of an era in NYC 1993: Experimental Jet Trash, and No Star. In April I highlighted Claes Oldenburgs's The Store and The Street, a narrower but important exhibition at the Museum of Modern Art presenting a tight selection of early work by the great Pop master. May brought us Punk: Chaos to Couture from the Metropolitan Museum's much revered – if weakly reviewed – Costume Institute. These last two shows can still be seen.

The Whitney Museum of American Art also offers us I, YOU, WE. Open since late April but up through September 1, Karen Rosenberg reviewed the show this morning in the New York Times. http://nyti.ms/197p3rR

Rosenberg helpfully proposes the Whitney's show as a prequel to the '90s era investigation offered by the New Museum's 1993 focus; it also serves as a crucial counterpoint to the all too easily citable image of the 1980s art world as all flash and cash as the good times rolled in the Big Apple. "Instead" she writes, "we see . . . artists reacting to AIDS, Reagan-era social policies, urban blight and gentrification, and a stock market boom and bust."

Very much as Art on the Block's high '80s chapter "Building Empires and Crowning Kings" gives way to the late decade years of "Rising Crescendos and Dying Chords", curator David Kiehl reminds us that against a backdrop peopled by art stars like Julian Schnabel, Francesco Clemente and Jean-Michel Basquiat, were artists working in an all together darker vein. The work of Robert Gober, Glenn Ligon and Kiki Smith are all included at the Whitney as is Nan Goldin's slide compilation The Ballad of Sexual Dependency. 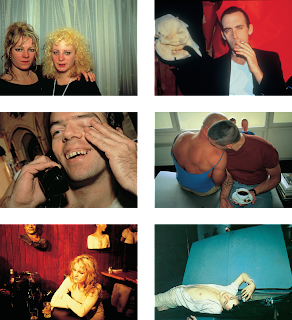 The work of all of these artists is also described and contextualized in Art on the Block and several examples are included in the color plates. The estate of Peter Hujar generously granted me permission to use a study of David Wojnarowicz David Lighting Up Manhattan Night (1) from 1985. Both artists are now tragically lost to AIDS. 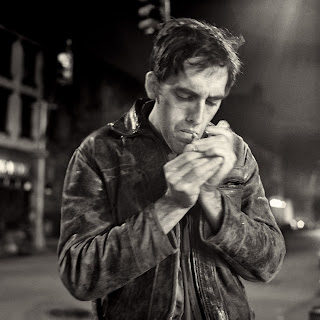 And painter Anton Van Dalen, whose 1986 work Luxury City is in Kiehl's line up, permitted me his harrowing street scape Evangelical Christian Church of 1983, a testimony to the devastating human costs of the crack cocaine epidemic and the ravaged inner city terrain that housed it. 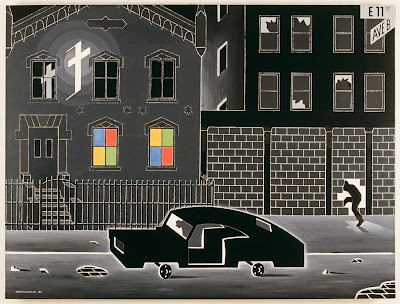 For those of you awaiting the book's release on September 17, the Whitney exhibition offers another opportunity to experience some of the poignantly timely art created during the period I document in Art on the Block. It might also be a moment to take one of the last looks at the Whitney Museum before it takes its art to another block in the Meatpacking District.

Posted by Ann Fensterstock at 11:49 AM No comments: