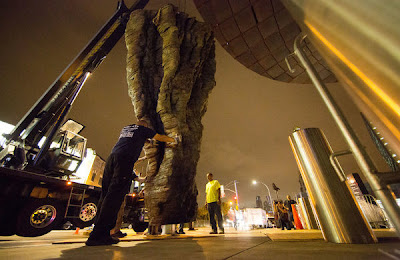 While much play was made in the article of the German-born sculptor's 35 year tenancy of "a vast studio in Williamsburg", now 71 years old and at the height of both her creative powers and international fame, artists of Ms von Rydingsvard's stature are about the only ones still able to keep studios there.


By the turn of the new century, however, the Manhattan spot light was beaming down on the outer borough as galleries proliferated and critics and collectors alike made the Williamsburg scene their darlings. Poaching of talent by Manhattan dealers and what were seen as traitorous defections by Williamsburg galleries decamping across the river left the scene depleted and interest waning. The era of Williamsburg as prime ground for artist-unaffordable condominiums and beyond-the-budget boutiques was inevitably underway.


Posted by Ann Fensterstock at 7:55 AM